Our journey to discover new approaches to the tastings could not miss the natural stability wines, related to biodynamics, but also carriers of the most authentic taste of the land; the one that is not contaminated and that lets the nature takes its course and brings its special… variations on the theme

One of the first beaties – in our journey to discover the innovative tastings – which I want to tell you is Cantine Capecci. In the hills between the Apennines and the Adriatic Sea, at the entrance of the magnificent village of Acquaviva, family Capecci leads a winery with a “genetic” passion handed down from generation to generation.
Why do I want to tell you about them? Obviously because they produce wines of excellent quality … but the real reason lies in their innovative choice: to innovate by eliminating innovation. Let me explain: the sons of the owner, Roberto and Rita, have decided to invest in a “natural” production line of the wine that has led them to produce wines following the ancient unwritten laws of oenology; a production of wines without added sulfites and natural stability where the fermentations are activated only thanks to indigenous yeasts and are not used allergens and a whole series of additives which are commonly used in oenology during the processes of clarification.
I recently took the other three Taste Explorers to have a tasting at Capecci’s. It has been a great success! I managed to satisfy the three of them: the Healthy one went crazy for a Nudo of 2013; a wine made by Montelpulciano, Sangiovese and Cabernet Sauvignon grapes, because not only it is a red wine with excellent structure and good alcohol content, but also because we have said to her that there were no sulfites or chemical additives. The Traditionalist one, who appreciated the idea of the recovery of ancient manufacturing techniques, was seduced by a Accubitu, Cabernet Sauvignon that finds its natural stability and its balance in barrique for two years without using any kind of enological clarification; a highly tannic wine with herbaceous reminiscences, that amazed her while it changed flavor in the glass with each passing minute. 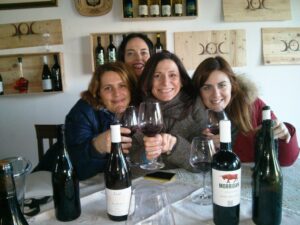 For the Intellectual Gourmand one I had a real treat… a Passerina Spumantizzata, the Petra, that has a full and enveloping taste, with a just sour note that enhances its freshness. A dry taste that with each passing minutes sweetens itself to give delicious fruity notes of pineapple and peach, a wine that in its simplicity gives a great food combination flexibility.
The tasting was expertly accompanied by the words of Roberto Capecci who told us how the decision to let their wines ferment just with indigenous yeast is oriented to the exaltation of the territory’s characteristics: they are wines that have inside all the flavor of the Piceno’s hills, without contaminations. “The nature dictates its laws and we follow them.” continued Robero Capecci “There are no human interference in this type of production. Our role is to sit on the sidelines and let the rooms enjoy the best working conditions while the natural law does its job.”
Are wines that evolve year after year, month after month, the Capecci’s family has built an “archive” of the various evolutions of their wines in order to enjoy the progress and observe the maturation and changes year after year … just as nature intended! 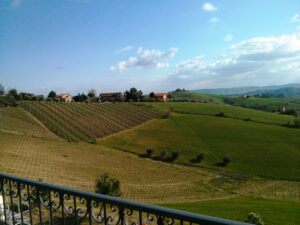