A simple recipe, made with flour, water, yeast, olive oil (a little) and a bit of salt and pepper. You can prepare it in your own kitchen, the secret is to cook it on a wood oven … then it becomes a very special way to accompany meats and cheeses.

When I enter the bakery, I get in front such a large assortment that I find it hard to choose what to buy… so, in confusion, I end up to ask to the store clerk to give me a simple bread, such as a time, perhaps not too salty, baked in a wood-burning oven (the favorite one in my family since I married a real Florentine!). And the most of the time it is not available!!!!
And so it often happens to me to coming home after having worked, roll up the sleeves and make the bread myself, in order to choose the most genuine ingredients… and let the scent wrap the house.
Moreover, since by tradition and simplicity you can often get the best of taste, I want to tell something more about a traditional bread of the Marche: the Crescia Cingolana.
The crescia, in the rural tradition of our region, was made as remains after the preparation of the bread. The braed, indeed, always homemade prepared, having to last even two weeks or more, it used to be made in very large shape in order to last as long as possible. The remaining dough, that it was not enough to make another roll or loaf of bread, was crushed and cooked on the grill, resting on the embers of a wood oven.

The Crescia cingolana is the result of this ancient tradition and it is perfect to accompany our local salami, such as the Ciauscolo or the Lonza. In the Marche it is often served with sautéed vegetables with olive oil and garlic, to which – the greediest – match grilled sausages or slices of Pecorino of Sibillini Mountains.
My personal favorite of the many is made in Cingoli, from Villa Ugolini Restaurant where Pierino, the owner, since many years makes it one of its strong points, and it also makes variations to the traditional one, for example excellent Crescia with onion and Crescia with polenta.
The first time I tasted Pierino’s crescia I was with my whole family in Villa Ugolini, and my children have immediately adored it. Now it is the main ingredient of our tasty Saturday nights, as an alternative to pizza, or for delicious spring lunches.
Unlike the piadina, crescia is thicker and served in small slices (each piece weighs around 450 grams and you can do even 12 little slices).
I assure you that you will not have time to warm them that in a few minutes they will be eaten up!!!! I want to tell you a little secret that Pierino revealed to me: do not heat the crescia in the oven because it dries too much, but place it directly on the griddle, on a non-stick pan, or, if you do not have anything else, put it in the toaster! It is special! Enjoy your meal!! 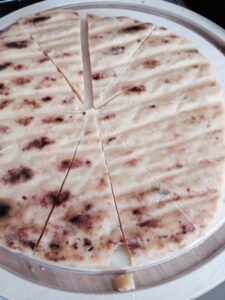